Hello again, StN readers. Memorial Day is on last month's calendar, we've already broken 90 degrees a handful of times and the Garden State's beaches are clogged with the cosmetically inflated and pharmacutically enhanced. It is summer in New Jersey once again.

It's been a month since we last checked in from TRUCK America. We've continued work on our debut LP, which is taking about as long as painting a house with a toothbrush. Recording at home has it's share of pros and cons and all that "free studio time" that once felt like a luxury is starting to hurt more then help. There's something to be said for working on the clock and the urgency it brings. Not to say we haven't made progress. Things are moving forward, but sometimes you need someone to crack the whip to keep you honest. Of course, what better way to keep it honest than to put it in writing. Our goal is to complete all tracking (minus vocals) by our next show on July 9th, which is probably more optimistic than likely at this point.

The working title for the record is Palace Amusements, a reference to the now defunct amusement park and Jersey Shore landmark. Despite the name, the record is not about Asbury Park but that (in)famous town comes up a few times. We've recorded 15 originals (going all the way back to our start in 2007 and stretching to our most recent songs) as well as a cover of The Mighty Lemon Drop's "Inside Out". 15 is a lot for a record, so that list will probably shake out to 10-12 tracks on the final cut.

One final note about the record, and it's a bit of good news/bad news. The good: Palace Amusements will be released on the Baltimore based Beechfields label (a formal announcement will come in the next month). We are very excited to be working with such talented and dedicated individuals and we're looking forward to playing more shows together. The bad: this marks the end of the line for Tabbycat Records. It was a lot of fun, but it simply became too expensive and took too much time to do things "the right way". The point of the label was to release our music and after a while it started getting in the way of that goal. I don't think this will be our last venture releasing our own records, but for now this chapter is over.

We've got two shows on the calendar for July and possibly a third one in the works. 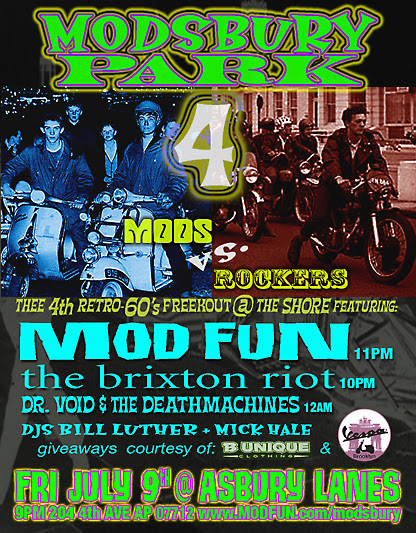 On Friday, July 9th we return to our favorite spot south of the Driscoll bridge, the one and only Asbury Lanes. This time around we are the gracious guests as the fine lads from Mod Fun host their fourth MODSBURY PARK concert series. The theme is "Mods vs. Rockers" - that makes us the rockers, but we're not complaining. We are really excited to play with Mod Fun again. We shared a bill at The Loop Lounge a couple of years back and they were great. Also on the bill are Dr Void & The Deathmatchines, bringing their awesome rockabilly via punk tones. It's a Friday night, so don't be such a square, Daddy-O....

Our second July show is a rare mid-week performance and an even rarer outdoor show (only our second or third). But the real change here is the venue. On Tuesday, July 13th, we will be performing at Great Adventure in Jackson, NJ. This show is part of 90.5 The Night's Live and Local series hosted by The Night's own Jeff Raspe. Joining us will be our good friend Jon Caspi and the Jon Caspi Band. This one is an all ages show with a 6 PM start, and tickets are covered as part of the park admission.

Great Adventure can get pricey, so here are some ways to keep the admission price down:

If you want to come all day and ride some coasters with us, discounted tickets are available online at https://shopsixflags.accesso.com/clients/sixflags/affiliate/index.php?m=13302

If you can't make it out for the whole day but would still like to see the show (and maybe ride some coasters), tickets are only $19.99 plus tax after 5:00pm on Tuesdays.

Not bad for a day at Great Adventure. Bring the kids if you are so inclined (we'll keep the stage banter clean); being able to bring our own kids was a huge part of why we took this show in the first place.

Long post. That's all I've got. See you next time.