We're writing to inform you that an extremely rare occurrence is...well... occurring... We are playing a live show this month. 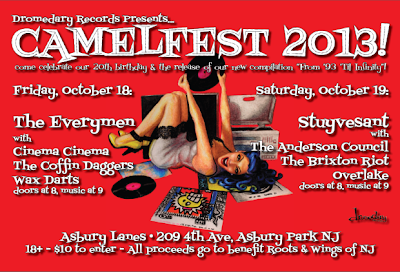 Last year, we had the extreme pleasure of taking part in Dromedary Records excellent Camelfest at Maxwell's.  By all accounts, it was a great time.  This year, they're bringing this great event to our favorite club, Asbury Lanes in Asbury Park, NJ.

The best thing about Camelfest is that all of the proceeds go directly to the Roots and Wings Foundation of New Jersey.  This is an important organization that does very special work in our state - specifically, they provide support and services to children who age out of New Jersey's foster system.  We are thrilled to lend our talents (as humble as they may be) to this wonderful cause for a second time.

This year's Camelfest is also part of Dromedary Records 20th anniversary festivities.  To celebrate this milestone, they will be releasing a compilation album of songs originally released in 1993 and covered by Dromedary bands and other artists, including us.  We'll be revealing our song choice very soon Dromedary has revealed the track listing and you can check it out here. 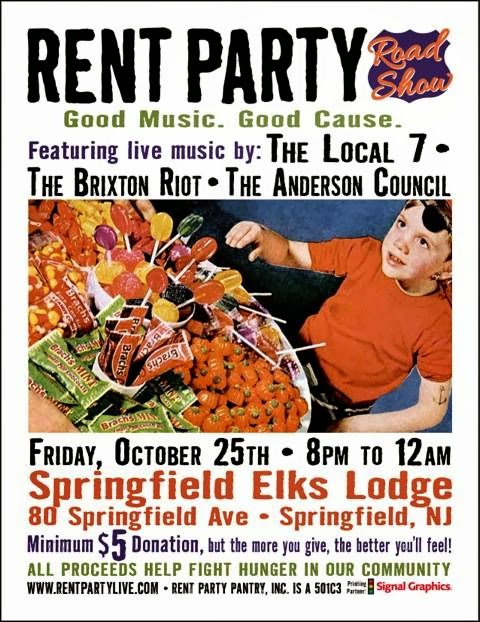 On Friday, October 25th, we will be rejoining our new Elk friends for RENT PARTY Road Show. This is when the Rent Party crew takes the very popular and well established South Orange ﻿events and presents bands at different lodges in the area.

We've played and attended Rent Party events in the past.  These are some of the best places to catch live music in New Jersey right now.  The bills are always excellent (again, ourselves withstanding) and cohesive.   The sound is good.   There's cheap booze.   They're held in nice areas, unlike some of the unsavory places we've played in the past.  The cover is more than reasonable (and goes directly to fighting hunger in the community).  There's cheap booze.   There's free parking.  And more than anything else, the atmosphere just feels like a big party.  This is likely related to the cheap booze.

We hope you can make it out to one (or both) of these events and help us raise money for some important causes and help us wrap up 2013 as we wind down our show calendar for the year.

As always, thank you for your support.  We truly appreciate it.

$10 Donation to the Root & Wings Foundation of NJ

The Local 7
The Brixton Riot
The Anderson Council

$5 Donation at the door to benefit the local food bank

Posted by The Brixton Riot at 5:57 PM No comments:

It's A Cruel Summer

Hope you've been enjoying your summer.  We know it's been pretty quiet around here, so we thought this might be a good time to fill you in on what's been happening.  .

After a short break, we're getting back to playing shows again, starting with our rescheduled radio session on WRSU's Overnight Sensations.  We'll be joining Geoffery Pape on air to play a few songs and talk for a bit.  The show will air Friday, August 9th at 10:30 PM.  So it's like going to a show but it's free, there's no parking and you don't have to leave the house.  You just have to stay awake until 10:30.  You can do that, right?

In Hurricane Sandy related news, we've got a track coming out on a benefit album next week.  My Hometown: a Tribute to NJ is a collection of songs originally recorded by NJ artists covered by an eclectic mix of indie bands. All proceeds will go to the Hurricane Sandy New Jersey Relief Fund.  You can pre-order the CD now and you'll be able to download two tracks immediately (The Successful Failures covering Fountains of Wayne and The Paper Jets covering Bruce Springsteen).  The CD will be officially released on Tue. July 23rd on the FDR label.  Our selection was a personal favorite - Yo La Tengo's "Upside Down".  We had a great time recording it with Chris and Peter of The Anderson Council - Peter even contributed the excellent backing vocal on our version, so be sure to give it a listen.

We have a second song coming out this summer, and once again, it's a favorite from the 90's.  This year marks the 20th anniversary of the Jersey based micro-indie label Dromedary Records.  To celebrate, they're releasing From ’93 ‘Til Infinity: A Dromedary Records Compilation, a deluxe vinyl double-LP, featuring more than a dozen artists performing cover versions of seminal indie rock songs from the year 1993. Like My Hometown, we're very excited to have contributed a track to this fine collection.  Since the plan is to keep the track listing a secret until the album comes out, we won't reveal what song we contributed, but you might be able to guess.

Before signing off, we wanted to take a minute to talk about Maxwells.

As you probably already know, Maxwells will be closing its doors forever on July 31st.  We've seen a number of clubs come and go, but this isn't just another club.  Simply stated, Maxwells is the cornerstone of the New Jersey independent music community.  As Ira Kaplan eloquently put it during Yo La Tengo's final Maxwells set, "without this club, this band does not exist".  While Yo La Tengo (and undoubtedly, The Feelies) are inextricably linked to Maxwells, I think a lot of bands and musicians share a similar sentiment.  I remember talking about playing there before we had even played our first show; it was one of our first goals as a band.  We held both of our record release shows at Maxwells because we knew it was always a good time there - as performers, as members of the crowd, as dinner patrons.  As we've mentioned before, we have important history that will always be connected to 1039 Washington Street.

For all of the great memories, all the shows (and all the free dinners) and for everything you did, we sincerely thank you from the bottom of our hearts.  Thank you Todd Abramson for booking us - the first time and every time.  Thank you Carson and all the other wonderful sound people we've worked with over the years.  Thank you to the hosts and hostesses, waiters and waitresses and all the bartenders, cooks and staff for making it the special place that it truly is.

Posted by The Brixton Riot at 7:49 PM No comments:

This coming Friday we will be performing at a Rent Party show at the South Orange Elks Lodge.

If you're unfamiliar with Rent Party, it's a great group of individuals dedicated to fighting hunger in the South Orange and Maplewood NJ communities by hosting local music shows at the South Orange Elks.  The price of entry is an extremely reasonable $5 and that money goes directly towards stocking Rent Party's food pantry for the community.  We will be sharing the stage with Dollar Store Riot (no relation) and Zombies Of The Stratosphere. 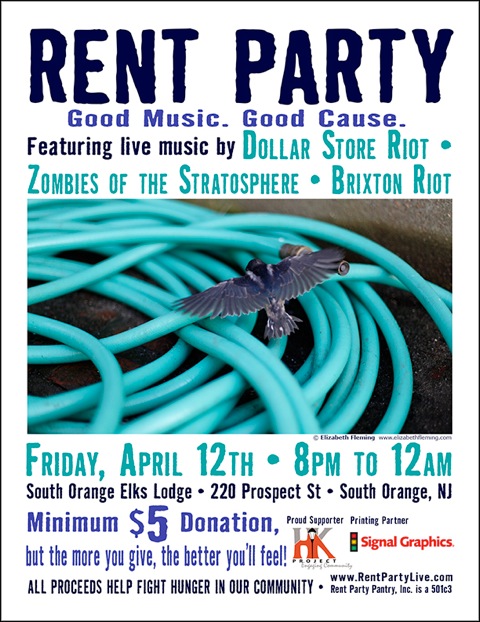 We hope you will join us and help feed NJ families.

Dollar Store Riot
Zombies Of The Stratosphere
THE BRIXTON RIOT

Posted by The Brixton Riot at 7:57 PM No comments:

We're pleased to let you know that a week from this coming Saturday, we will be performing at the Court Tavern.  We're always happy to be at The Court, but this is a date of certain significance for us - it is the 6th anniversary of the first ever TBR show, all the way back on 2/9/2007.

Even better, we're going to be joined by The Anderson Council for their "home town" CD release party for their great new full length, "Looking At The Stars".  Filling out the bill are Eastern Anchors - who are also supporting a recently released LP, the excellent "Drunken Arts & Pure Science" - and Hoboken's favorite sons, the magnificent Stuyvesant. 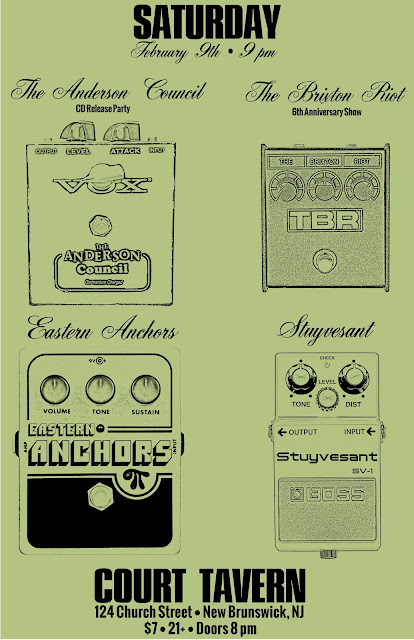 It's only $7 and doors are at 8 PM.  We took the early slot so we'll be up first (we know you need to get home to pay the babysitter).  We also hear that the Court is looking really nice these days, with actual doors on the bathrooms now.  Looking forward to seeing that with our own eyes...

A 6th Anniversary seems like a strange thing to celebrate, but it's been a long and interesting ride to get here.  When the Court closed its doors last year, it seemed incredibly unlikely that we (or anyone) would play there again.  To say we are excited to be celebrating our 6th year together at the site of some of our earliest shows is an understatement.  We hope you will join us for the party.