We're getting ready to wrap up another year over here, but we're going to make a few more stops before the holidays hit.

First up will be a visit to WRSU in New Brunswick for a live radio session on Overnight Sensations. Tune in to 88.7 next Friday (November 2nd) at 10 PM in the Central NJ area or listen online at the WRSU website. We'll be performing 6 songs live and sitting down with Geoff Pape and Lia Wilderman to discuss the pressing issues of the day, like the RU grease trucks and phat cats.

The following Sunday, we will *FINALLY* be back in New York City to perform at this year's International Pop Overthrow (our last NYC show was IPO 2009). Hope you can join us, people of Manhattan and surrounding tribes. 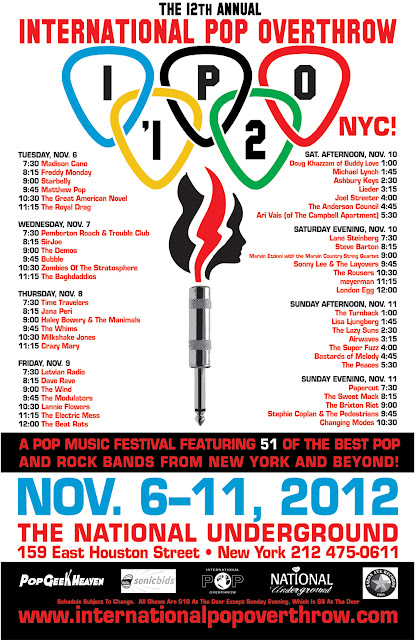 In Memory of Erin West Formica

It is with a heavy heart and great sadness that we the share the news that Erin West Formica has passed.

Our heart goes out to her family and friends, and especially to our brother Mark, her daughter Isabel and Mark's son Elliott.  News of Erin's passing has been received with disbelief by those who knew her - not just because she was loved by many, but because she was so full of life.  A warm smile and a contagious laugh; Erin had a big personality - the kind that could not be ignored.

Matt had known Erin years before he joined the band, but the rest of us had our introduction at Maxwell's.   It was an August night back in 2009 and the Yankees were playing a late season series with the rival Red Sox. Between two songs, we inquired on mic about the current score.  We were greeted with only one response from the back of the room - a very loud and crystal clear "Yankees SUUUUCK!" And with that, we had officially met Erin - and Mark had met his future wife.

Her response was half good natured smack talk and half unwavering loyalty for her beloved Boston Red Sox.  I remember thinking that this bold stranger would be outnumbered by Yankee fans at a venue so close to New York. It didn't matter, because Erin couldn't be "outnumbered" - in the literal sense perhaps, but never in the figurative sense.

It's incredibly unfair that someone like Erin could be with us for only 36 years.  Yet she was able to touch the lives of so many people - more than some of us will in twice as much time.   She taught us all how to be brave and smile in the face of incredible odds and never surrender.  The sadness we feel today is not for Erin, but for ourselves.  Because it truly is our loss.

Erin, we will always remember you fondly and celebrate your life.  We will miss you terribly, but the mark you have made on our lives will always be with us.

Posted by The Brixton Riot at 11:21 AM No comments: