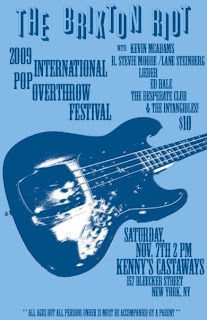 WHAT: The Brixton Riot returns to perform at the 9th Annual International Pop Overthrow Festival for the 3rd consecutive year.

WHEN: Saturday, November 7th at 2 PM.

WHY: Because we're huge fans of IPO and of Mr. David Bash, the man who makes it all happen. International Pop Overthrow (or IPO, as it has affectionately become known) is a pop music festival which features the best pop and rock bands from around the world. The festival takes place annually in several U.S. cities, including Los Angeles, Chicago, New York, Boston, Detroit, San Francisco, Seattle, Atlanta, Chapel Hill and Minneapolis, two cities in Canada: Vancouver, British Columbia and Toronto, Ontario, as well as Liverpool, UK.

And to top it all off, we have the good fortune of sharing the stage with Lieder, one of NJ's finest and one of our personal favorite bands. If you've been to a few of our shows, odds are you've seen Lieder once or twice. They're a great band and you DON'T want to miss their set. In fact, you can't go wrong with any of the bands on this bill or on any other night at IPO. David goes to great lengths to put together cohesive lineups and find some of the best rock and power pop bands you've never heard. We'll all be there early and stay until the end. Here's the full lineup.

This is our first show in three months and it's the last "planned" show for 2009. We don't expect to be adding any others before the New Year, but hey, you never know...

Posted by The Brixton Riot at 5:37 AM